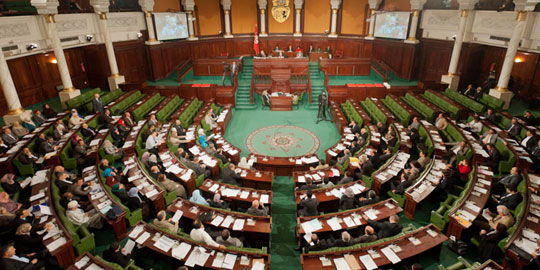 Today marked a long-awaited moment in Tunisia’s arduous democratic transition. After two years of drafting, the fourth and final draft of the constitution will finally be debated and voted on in the plenary. The draft is the result of work by 6 assembly committees and a Coordination and Drafting Committee, a national consultation process with the public (including outside Tunisia, with Tunisian diaspora), rounds of consultations and exchanges with national and international experts, civil society and international organisations and political negotiations inside and outside the Assembly.

The final draft of the constitution under discussion was that presented to the Assembly on 1 June 2013 – (an unofficial English translation is available, prepared by the International Institute for Democracy and Electoral Assistance). The draft constitution contains 146 articles, numbers 35 pages and is around double the length of the previous 1959 constitution, with the preamble taking up the first page. 256 amendments to this draft were submitted to the assembly administrative bureau by deputies, and these will be debated over the coming days. 400-450 votes are expected to take place overall, on articles as well as amendments.

Attendance at the opening of the final debate on the constitution was high, with 184 deputies taking part in the first vote, rising to 203 by the end of the morning session. Attendance in the assembly has been a recurring problem, with only 138 deputies out of 217 attending last week’s vote on the Finance Law and Budget for 2014.

Hbib Khedhr, the General Rapporteur and Coordinator of the draft constitution, clarified the procedure to be followed – discussions and voting would proceed article by article (or in the case of the preamble, paragraph by paragraph). The final draft text would be read out, and three minutes would be given to speak for and against the original text. The first proposed amendment on that article or paragraph would be read out, the deputy proposing such amendment would be given the chance to speak for three minutes, then a deputy would be able to speak against for three minutes. Then a vote would take place on that amendment. The discussion would then proceed to the next amendment on that paragraph or article, with views for and against being heard and voted on, and so on. Once all amendments on a paragraph or article had been discussed and voted on, the final text of the article or paragraph as amended would be voted on.

The discussion began with a brief discussion and vote on the title of the constitution – the original being “the Constitution of the Tunisian Republic”. A proposal to amend this to “the covenant of the revolution” met with little favour among deputies, with an overwhelming vote against.

Disagreements and confusion as to a number of procedural points held up the discussions at several junctures, including questions regarding the process of discussing proposals made by the Consensus Committee, a committee composed of a number of political groupings (which together represent approximately 90% of deputies). The committee was created to address persistent points of contention regarding a number of fundamental points, such as the relationship between the executive and legislative powers and rights and liberties. The Consensus Committee, Ben Jaafar explained, had met 37 times since its formation in June 2013 and had reached agreement on 52 fundamental points of disagreement among the groupings. The majority of deputies from the blocs represented within the Consensus Committee appeared, as the day wore on, to abide by the agreements reached within the Committee.

The majority of amendment proposals fell after discussion and voting, such as the suggestion by Azad Badi, a deputy in the Wafa Bloc (previously part of the Congress for the Republic, a left-wing secular party) to include a reference in the Preamble to criminalization of relations with Israel – with 133 voting against, 36 for and 14 abstaining.

At the time of writing, the session had voted on the following paragraphs of the Preamble:

In the Name of God, the Merciful, the Compassionate

We, the representatives of the Tunisian people, members of the National Constituent Assembly,

Taking pride in the struggle of our people to gain independence and to build the state, to eliminate autocracy and achieve its free will, in response to the objectives of the revolution of freedom and dignity, and out of loyalty to the blood of our blessed martyrs and the sacrifices of Tunisian men and women over generations, and to break with oppression, injustice and corruption.

Expressing our people’s commitment to the principles of Islam and its open and moderate objectives, on sublime human values and the principles of universal human rights, inspired by our civilizational heritage accumulated over successive epochs of our history, and from our enlightened reformist movements that are based on the foundations of our Islamic-Arab identity and to human civilization acquisitions, and adhering to the national gains achieved by our people;

With a view to building a participatory, democratic, republican regime, where the state is civil and is based on the law; where sovereignty is granted to the people through peaceful rotation of power through free elections, and on the principle of the separation of powers and balance between them; guaranteeing the right to association based on pluralism, neutrality of administration and good governance representing the basis of political competition; and where the state guarantees respect of freedoms, human rights, independence of the judiciary, equality of rights and duties between all male and female citizens and fairness between all regions;

Based on the dignified status of humankind; enhancing our cultural and civilizational affiliation to the Arab Islamic nation, on the basis of national unity that is based on citizenship, brotherhood, solidarity, and social justice; with a view to supporting Maghreb unity as a step towards achieving Arab unity, integrating with the Muslim and African nations, and cooperating with the peoples of the world; supporting the oppressed everywhere, and the people’s right to self-determination, and for just liberation movements at the forefront of which is the Palestinian liberation movement; and standing against all forms of occupation and racism;

Being aware of the necessity of contributing to the safety of the environment and the protection of the environment to ensure the sustainability of our natural resources and the sustainability of a safe life for coming generations; and achieving the will of the people to be the makers of their own history, while believing in knowledge, work, and creativity as sublime human values, seeking to become pioneers, and aspiring to contribute to civilization, on the basis of the independence of national decision-making, world peace, and human solidarity;

We, in the name of the people, draft this Constitution with God’s blessings.