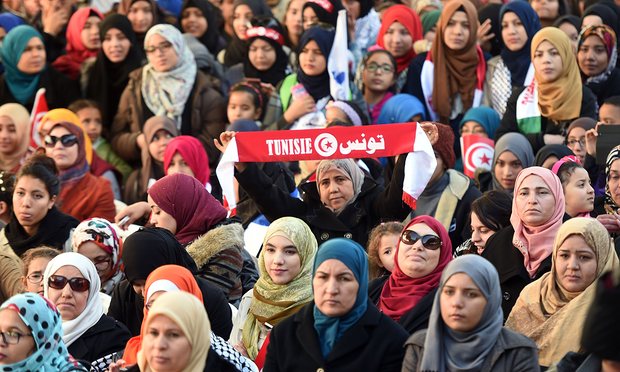 After 14 years of sexual harassment at work, Idihar Chaieb finally got her day in court. The widow had been repeatedly propositioned and groped

by her boss, who was also a local official in her home town of Menzel Bouzelfa, an hour’s drive from Tunis. When he finally got the message that Chaieb wasn’t interested in his advances, he threatened to destroy her reputation.

“I was afraid to speak out. I thought I would be blamed,” she said.

Finally, supported by a former teacher, women’s organisations, and her son – and buoyed by the 2011 revolution in Tunisia – Chaieb gathered the courage to sue her tormentor. “I didn’t want compensation, I just wanted him to leave me alone,” she said.

To her dismay, however, in March 2015 the judge ruled against her. Chaieb was fired from the company where she had worked for 25 years; her former boss demanded a letter of apology. She was left devastated and destitute.

Chaieb’s story is not untypical in Tunisia. Despite its reputation for being the most progressive country in the Arab world on women’s rights, with almost one-third of parliament consisting of female MPs and more than 700 civil society organisations working on gender issues, violence against women and sexual harassment are endemic.

Almost half of women aged 18-64 – 47.6% – had experienced some form of violence, according to a 2010 survey. There is little evidence that the situation has improved since the uprising that ended the dictatorship of Zine al-Abidine Ben Ali and led to a democratically elected government.

However, this month Tunisia’s parliament is debating a bill to strengthen legislation on violence against women. Championed by Ennahdha, a conservative reformist party with Islamic roots and a clutch of dynamic female MPs and officials, the bill is expected to be passed by the end of 2016.

The proposed law, which would be incorporated into other legislation and government policies, would introduce sweeping definitions of gender-based violence, covering psychological and economic harm in both the public and domestic spheres. Marital rape would be outlawed and there would be an end to impunity for rapists if their victims are under 20 and they subsequently marry them. Penalties for sexual harassment at work would be increased and police officers and hospital staff trained in gender issues.

Women want a chance to say what happened, how it destroyed their lives, how they were rejected by society

The scope of the bill may challenge western stereotypes of Islam, but Mehrezia Labidi, an Ennahdha MP and chair of the parliamentary women’s committee, said: “We see no contradiction between Islam and protecting women’s rights. We have a progressive reading of Islam.”

Sayida Ounissi, 29, another Ennahdha MP and secretary of state for entrepreneurship in the coalition government led by the secular Nidaa Tounes party, said: “It’s good to have conservatives like us saying violence against women is not acceptable. Some conservatives might argue that the state should not interfere in the private space [of the family], but when a person’s physical integrity is harmed, the state needs to step in.”

Tunisia may have a better record on women’s rights than other countries in the region, “but we compare ourselves to international standards”, she added.

Tunisia is a country of contradictions when it comes to women’s rights. Free abortion and contraception are available, and women have equal rights in marriage, divorce and property ownership. In 2010, one-third of judges and more than four in 10 lawyers were female; in 2013, 30% of Tunisia’s engineers were women.

In 2014, three years after the revolution, equal opportunities were enshrined in a new constitution. Political parties were required by law to alternate men and women on electoral lists, ensuring substantial representation in parliament. In April 2014, Tunisia lifted its reservations to the UN Convention on the Elimination of All Forms of Discrimination Against Women.

But in socially conservative towns and villages, men and women continue to follow traditional roles. The word of a woman usually carries less weight than that of a man when accusations of sexual or domestic violence are evaluated, according to an Amnesty report.

Women who have been raped or sexually assaulted are often seen as bringing “dishonour” to their families. Victims of domestic violence are frequently pressed to drop complaints for the sake of family unity and reputation.

Though recognised as a specific crime since 1993, family violence is widely accepted as “normal”. In 2012-13, two-thirds of the 5,575 complaints of marital violence lodged with the authorities were withdrawn or dismissed; only 10% resulted in convictions. The police may refuse to investigate complaints and allegations – and sometimes they are the perpetrators.

Siham Beji knows this all too well. The 51-year-old grandmother was attacked by three police officers on the street early one morning in May 2012. They beat her, breaking her jaw, and took her identity papers, a watch and a bracelet. Then they kept her in a police cell for three days. After a court appearance, in which the officers claimed she had been drunk and attacked them, Beji was fined and spent a further three days in prison. No medical attention was offered.

Eventually, with the help of the Association of Democratic Women, she brought a case against the men. A year after the attack, the officer who broke her jaw was sentenced to three months in jail; the other two got three days for their part. All three are still serving police officers.

“I became another person after the attack,” said Beji. “I completely changed. I became aggressive, and I get upset and angry easily.” She said her family blamed her for the episode. “I’ve tried to kill myself seven times.”

Violence meted out to women by the police and security forces stretches back to the early days of the dictatorship. The Truth and Dignity Commission, established by the post-revolution government, has received 15,000 complaints from women who were raped, tortured and degraded under the regimes of Ben Ali and his predecessor, Habib Bourguiba.

According to Ibtihel Abdellatif, the body’s commissioner for women, the number does not reflect the scale of violence against women. “For every man put in jail, be sure there were at least four women who were also victims – mothers, wives, sisters, daughters,” she said.

“Many who have come to us say they don’t want reparation, they just want a chance to say what happened, how it destroyed their lives, how they were rejected by society. The impact on women was much greater than the impact on men.”

The commission is attempting to deal with the past; the violence against women bill aims to give greater protection in the future. But the politicians promoting it hope for something more than legislative change.

“We can’t change people’s lives simply by passing a law,” said Labidi. “We change lives by education, raising awareness, changing the language around violence against women.”

According to Ounissi: “Passing the law is the beginning of the process, not the end. You need the support of the education system; this starts at school. You need a training programme for the police. And you need to look at television shows that normalise violence. People are more influenced by what’s on television than what’s in a parliamentary bill.”

Ounissi, the daughter of an imam added: “The mosques also play a major social role. These people are public servants, they are paid by the state – so we need to get the ministry of religion involved. If we can monitor imams for signs of radicalisation, we can monitor them for what they say on domestic violence. I don’t think it will be difficult.”

The Ennahdha party was historically labelled “Islamist”, but six months ago it ditched that description in favour of “Muslim democrat”. The move, which followed a three-year process, was overwhelmingly supported at Ennahdha’s congress last spring. The movement draws comparisons with European Christian Democratic parties, saying its new label reflects a forward-looking democratic reformist party rooted in Islamic values.

Ennahdha – now a partner in the coalition government – expects the violence against women bill to win strong parliamentary support, although some compromises may be required before a final vote.

Amna Guellali, senior Tunisia researcher at Human Rights Watch, said the bill was a “comprehensive framework for fighting violence against women”. All state institutions were mandated to incorporate it but “its practical impact will depend on a willingness of the state to provide the means of implementation. In Tunisia we have a tradition of passing good laws, but the reality on the ground is more complicated,” she said.

For Chaieb, any move that strengthens the rights of women is to be welcomed. Her story has taken a turn for the better since she lost her case against her predatory boss.

Women’s organisations helped her financially by investing in a small grocery shop she opened, and by finding her a lawyer prepared to act on a pro bono basis. In March, Chaieb returned to court, and this time her former boss was found guilty of sexual harassment and fined 25,000 dinars (£9,000).

A further appeal is yet to be heard, and Chaieb has not received any money. “But what happened to me has been recognised,” she said. “I hope justice has been and will be done.”