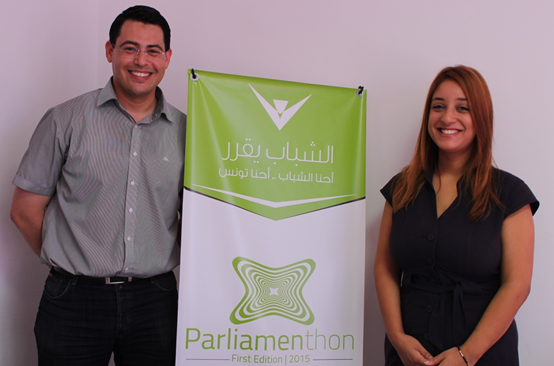 JasmineFoundation – I firstly met her at JF Annual Conference last June as she contributed to the panel on the emerging tools of participatory democracy. She struck me with her straightforward thinking, eloquent speech, commanding charisma and outstanding public speaking skills. But perhaps more importantly, what really stood out for me was her clear vision on the instrumental role that the Tunisian youth have to play if the revolution’s goals are ever to be achieved (read my previous article for more details). That’s why I decided to interview her to know more about her organization, activities and plans. Excerpts:

Who is Wala Kasmi?

I am Wala Kasmi, 28-year old, President of “Youth Decides” organization, I am a computer science engineer and I have also studied some law, and now I conduct research in the field of technology at the service of youth and society.

How did it all begin?

Since 2009-2010 I was one of the founders of a citizenship movement called Birsa, we were a group of youth looking for solutions to overcome dictatorship and for a new project for the Tunisian society that should be led by youth; and then came the revolution to which we contributed; we consequently separated, each contributing to the country in the way he prefers; I’m probably one of the few who still believe that we can’t call this a revolution if a societal project is not proposed by the youth as they are the ones who started it all; a societal project where there is room for everybody, where politicians are competent and ethical; so after 2011 I started organizing meetings between the active youth to discuss what can be done and how to bring about a new revolutionary project for Tunisian youth; the first time the name “Youth Decides” appeared in public was in summer 2013, and the idea was highly praised by youth, and that’s how the organization started; it’s been active for one year now to make the youth active in the society.

What is your philosophy?

“Youth Decides”, in addition to being a movement or an organization, although it could take any other legal form in the future, is above all an idea or a philosophy: we present a generation that owns a new force, an exceptional generation that differs from any other before, be it the 60s or the 20s; this generation possesses a very powerful tool that allows it to control information across the globe; this tool is the new technology that enables the youth to control information instantly, internationally, without geographical or time restraints, and in audio-visual format! So for the youth to be able to share information with the world, be it to get heard or to contribute to the development of the country, calls for including them in the decision-making process or at least give them the chance to contribute -alongside the current political elite- to the shaping of public policies oriented to future generations, because we at “Youth Decides” believe that you can’t decide something for future generations without having our say in the process; in fact, you could say that our generation represents the link between the former generations and the upcoming ones, because we lived for a long time without this technological prowess and openness and now we don’t know what impact to expect to have a 3-year old child operating a smartphone in his hand, that’s why our generation must be at decision-making positions.

Tell us about the “GOV Tunisia” and “I Decide” applications

During the presidential elections, we launched an application called GOV composed of 2 parts: the first part allows you to add + and – to the candidates, and by doing that you can also access the statistics of the candidate: how many women support him, what are the age groups that support him, the political groups behind him, so you can gauge his popularity amongst the Tunisian people, the youth, the adults, women and men. The second part is composed of questions we’d like to ask for the Tunisian people, in just 140 characters, for example “do you support parity in the next government?” and see how people react. This application was used one million 2 hundred thousand times in just 45 days, and we experienced thanks to it how to bring the youth back to the elections, democracy and public affairs.

Thus, after that, we decided to launch an application called “I Decide” which allows everybody, namely the youth, to participate in the shaping of the public policies in the country, the making or proposition of laws. It starts with the identification of a problem, be it with a law or a social phenomenon, and everybody respond to that by giving more details and arguments about the issue. We can state an example that can be understood by everybody: the decree n°52 related to the consumption of cannabis. We could say that there’s a problem with this law; via our application, the doctors could intervene to say how it is problematic and why cannabis consumption is damaging; the parents can contribute and explain why they would the law to change as it destroyed the life of their children after spending one year at prison; the youth themselves can use the app to share their experiences or their relatives and friends’; the law-makers can contribute; the ministry of justice can give its opinion; each one with a specific field of expertise can add his input, and then we collaboratively craft an alternative to the current law according to the objective we want to reach. Obviously we don’t want youth to consume cannabis but in the same time we don’t want to turn them criminals or cost them one year of their lives; so we look for a realistic alternative that is beneficial for the country and the youth, and then we propose it to the ARP. That’s when another kind of work begins to convince the parliament to change the law and adopt our alternative.

For the community of “Tunisia Policy Shapers” I say be a force of proposal, because in our current situation and in general that’s what really makes a difference, it’s what you can bring to the table; we should note that this is the era where humanity has reached its top, so we as a new generation should ask ourselves, what can we add? What would be our legacy? So be brave and bold, be a force of proposal, because this is our country, including its institutions and its laws to which we are fully entitled to contribute. To young civic actors in general one word: dialogue! When you notice a young getting reclusive and not talking much with others anymore or maybe being attracted by extremists, do not leave him behind, talk to him, try to convince him that he deserves to live, and every human being deserves to live, and nobody on the plant holds the absolute truth; what really matters is global peace and that people can live safe and secure in their countries.