In a communication from the President of the Republic, Dr. Moncef Marzouki, to the leader of the Nidaa Tounes Party, Mr. Beji Caid Essebsi, the President tasked the latter, as the head of the party with the largest number of seats in the new Assembly, with forming a government, in accordance with Article 89 of the Constitution.

However, the request has been ignored by Nidaa Tounes and rejected by the National Dialogue. Why? It seems that there is disagreement over the interpretation of Article 89. The article states:

“Within one week of the date on which the definitive election results are declared, the President of the Republic shall task the candidate of the party or the election coalition that gained the largest number of seats in the Assembly of the People’s Deputies with forming a government within a one-month period, extendable only once. If two or more parties or coalitions have the same number of seats, then the nomination shall be based on the numbers of votes gained by each in the elections.”

The final results of the legislative elections were announced by the ISIE (Independent Supreme Council for Elections) in a public communiqué on 20 November 2014. President Marzouki announced on 21 November that he had sent an official written request to the headquarters of the largest party in the Assembly, Nidaa Tounes, tasking its leader with forming a government as required under the Constitution. However, some have argued that the “election results” referred to in Article 89 are the results of the Presidential elections, not legislative elections, and thus it is only once the presidential election results are announced that Article 89 kicks in.

The meeting of the National Dialogue (the political dialogue process between political parties, presided over by the UGTT and UTICA) announced on 31 October its view that it should be the incoming President of the Republic who should task the leader of the largest party with forming a government, and not the current President, Marzouki. They argue that such an important decision as requesting the formation of a new government cannot be carried out by President Marzouki given that he is an outgoing president and may be elected out of office in a month. Others have added the argument that as the Constitution requires the new Prime Minister to consult the President of the Republic on the selection of the Ministers of Foreign Affairs and Defense, it is necessary to wait until the new President is elected in order to consult him in the selection process.

Constitutional experts have been lining up to give their views on this juridical and political dispute. Iadh ben Achour, constitutional law professor, argued that is only once the new President is elected that Article 89 can be implemented, for practical reasons – negotiations over the formation of a government will be easier once the new Assembly is formed, so that the head of the largest party can confer and discuss with his allies inside the Assembly. He stated in an interview with Express FM, “the head of the largest party, when tasked by the President, needs to obtain the confidence of the Assembly, which means the new Assembly must have been convened. If attempts to form a government fail within four months, the President of the Republic has the right to dissolve the Assembly. Can you imagine, if for example the presidential elections are delayed for some reason, the President of the Republic dissolving the Assembly when he is an interim president, he is a candidate in the presidential elections and no longer has a mandate to exercise this right? All the meanings of Article 89 indicate that it cannot be implemented in the current situation we are living, which is still transitional”.

The parliamentary watchdog Al Bawsala, which followed the entire constitution-writing process, also adopts the view that Article 89 requires the tasking of the largest party to form a government within a week of the legislative election results, as shown in this flowchart: 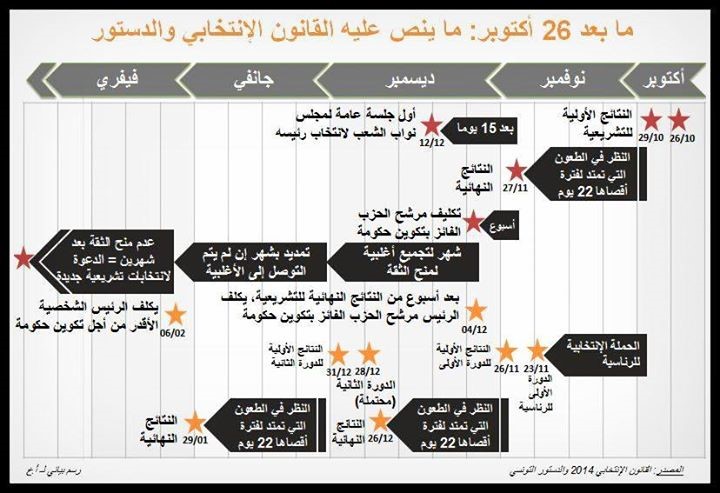 The National Dialogue reiterated, in a communiqué on 24 November, its position that it is for the incoming President of the Republic to request the formation of the new government. Ahmed Ouerfelli, legal advisor to the President of the Republic, called on politicians to resolve this dispute. Indeed, in the absence of a constitutional court (envisaged in the Constitution but yet to be formed) and in light of the changing balance of powers in Tunisia’s institutional scene, it will be down to political negotiation to solve the first of Tunisia’s constitutional conflicts.