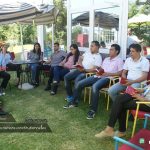 In partnership with The European Commission Project Presentation The “Youth Act” project aims to support the citizen participation of young residents of the marginalized suburbs of Greater Tunis in the structure and the process of local governance from the beginning of its implementation in Tunisia. The project of two years, Organizes various activities that motivate
Read More

In partnership with The National Endowment for Democracy Project context: In the democratic countries, the civil society contributes to the decision-making process along with government agencies, research centers and expert committees, which allow to focus on the urgent issues experienced by the citizens that may be overlooked by the decision makers because of electoral priorities
Read More

In partnership with UNDP The main objective of this project was to change the attitude and grow the interest of a group of 120 young unemployed graduates towards the participation in the public affairs and towards the new Tunisian constitution in particular. We chose to work on the marginalized region of Cité Tadhamon known for
Read More

Zouhair is one of our participants from Bhar Lazreg, a marginalized neighborhood on the outskirts of the luxurious region of Gammarth north of Tunis. During his teens, he didn’t give much importance to pursuing his high school education spending most of his time in the cafés of his neighborhood. Zouhair was never approached, prior to
Read More

Just over two years after its creation, the Truth and Dignity Commission (IVD) is organizing today the first public hearings of victims of the former regime this week. Neither more nor less than a “historic moment” for the commission chairwoman, Sihem Ben Sedrine. A historical moment More speaking than the figures presented in the commission
Read More

The US Embassy website posted a brief summary of the visit of MEPI representatives to our office in Tunis. The visitors met with some of the beneficiaries of MEPI funded project “Our Neighborhood Our Democracy” which is being implemented by Jasmine Foundation in the northern region of Tunis and aims to empower young unemployed living
Read More

Written by Fares Ben Terzi Executive Summary One of the most important elements of democracy is political participation, especially that of youth. The involvement of young people in the political process is of great importance, as demonstrated by the deep political developments in Tunisia after the revolution to which the youth have contributed a great
Read More

Tunisia “is experiencing today (October 24, 2016) a milestone in the history of Tunisia”, Prime Minister Youssef Chahed said yesterday after the country held its first High Judicial Council elections. This new stage in the constitutional institution “is likely to contribute to the consecration of the foundations of the independence of the judiciary which
Read More

Tunisian coalition party fights for women’s rights with gender violence bill After 14 years of sexual harassment at work, Idihar Chaieb finally got her day in court. The widow had been repeatedly propositioned and groped by her boss, who was also a local official in her home town of Menzel Bouzelfa, an hour’s drive
Read More

At first, I didn’t understand the point of the café jeunesse, the topic seemed to be very theoretical and far from the youth interest. I didn’t know anyone but the facilitator who invited me to check the event, it was a Sunday morning and I wasn’t very excited to do it but my curiosity pushed
Read More