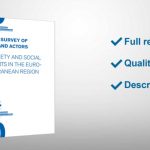 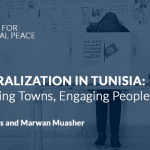 Carnegie Tunisia Monitor organized an event to release Sarah Yerkes’ and Marwan Muasher’s latest paper “Decentralization in Tunisia: Empowering Towns, Engaging People,” on Thursday 17 May 2018, in Washington DC. Mrs. Intissar Kherigi, programs director at Jasmine Foundation for research and Communication and a researcher at Sciences Po Paris, was hosted as a speaker at the event,
Read More

Jasmine foundation – Yesterday, 4 August, saw Prime Minister Habib Essid present the Supplementary Budget bill for 2015 to the Assembly of People’s Representatives for adoption. The head of government emphasized that the bill aims to address the “exceptional conditions” Tunisia is going through. The measures are primarily intended to guarantee the stability of public finances,
Read More

Jasmine Foundation – Open Government is gradually being adopted in Tunisia following the Revolution. Popular demands for greater government accountability led to the adoption of Decrees 41 and 54 in 2011 guaranteeing the right to access to information. The decrees outline procedures that allow any person to request to have access to the administrative documents
Read More

[divider] Domestic Developments [divider] Supreme Judicial Council – Who’s in and who’s out? The Tunisian public has become accustomed to complex legal debates on its screens, with the constitution-writing process introducing us to new legal minutiae we would never have dreamed of being exposed to. However, the recent dispute over the formation of the Supreme
Read More

Since the Revolution, Tunisia has lived through a phase of institutional innovation, establishing a new set of institutions seeking to reflect the Revolution’s demands for accountability, justice and representation of the will of the people. The National Constituent Assembly elected on 23 October 2011 had the primary task of drafting a new constitution, but also
Read More

The Energy Commission of the National Constituent Assembly issued a decision on 5th June rejecting the proposed renewal of the Amilcar license for hydrocarbon exploration requested by British Gas. The rejection issued by the Commission is due to a number of violations of the legal regulatory framework for granting licenses, including the following: – The
Read More